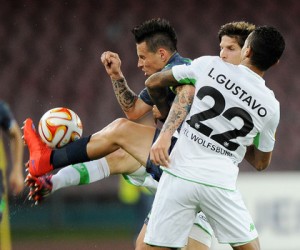 Serie A giants Napoli aim to lift the first Europa League (UEFA Cup) title since 1989 and they are the favourites to go through after the impressive triumph over Wolfsburg in the previous stage.

Meanwhile, this will be the first ever European semi-final for Dnipro, who, nonetheless, believe they can surprise their more illustrious opponents.

Napoli have worked hard to return to old glory days over the past few years and while they are getting close, the Azzurri have yet to prove their worth at the big stage.

With a top 3 finish in Italian Serie A still looking unlikely in spite of the run of four wins in last five matches, Rafa Benitez’s charges need to win the Europa League trophy in order to secure Champions League qualification.

And having hammered in-form Wolfsburg in the quarter-finals, Napoli can be backed at 1.40 (2/5) to win the first leg against Dnipro.

The Azzurri head into the high-profile clash in great spirits, having recovered from the Empoli loss to record a 3-0 win over AC Milan.

Rafa Benitez has no fresh injury worries to contend with, although the likes of Walter Gargano, Camilo Zuniga, Michu and Jonathan De Guzman remain sidelined.

It is fair to say many were surprised to see the Ukranian side reach the final stages of this year’s competition, but the reality is Dnipro deserve to be in the final four.

Myron Markevych’s side have played some good football from the very start to the season, defeating some tough opponents to reach the semis.

Dnipro came second in the group that also contained Inter, St Etienne and Qarabag, before recording hard-fought wins over Ajax and Club Brugge in the knockout stages.

Many believe the Ukraniains will prove difficult opposition for Napoli as well, and they can be backed at 4.33 (10/3) to reach the final.

Coach Myron Markevych will not be able to select from a full squad seeing as Ondrej Mazuch, Roman Zozulya and Evgeniy Shakov are out injured.