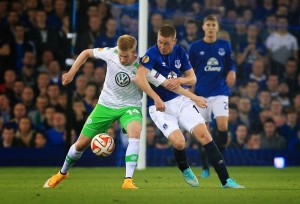 Everton are in all sorts of problems after a disappointing start to the season, and they’ve got not choice but to try and win this game and thus ease the pressure on the manager and players.

Lyon, on the other hand, are buoyed by weekend’s triumph over Ligue 1 holders Monaco and they will be looking to pile more misery on the Toffees.

Backed by the heavy summer recruitment, new manager Ronald Koeman was expected to enjoy a bright start to his career at Goodison Park, but things did not turn out the way he planned.

Bar several home wins against weaker opposition in Europa League qualifying stages and Premier League, the Toffees have been largely disappointing in the opening exchanges, and it would appear as though Ronald Koeman has just a few weeks to save his job.

There is no denying that the heavily reinforced squad have got the quality to challenge for a top 4 finish in the Premier League, but they also need a boss capable of getting the maximum out of the side.

In all fairness, Koeman was never going to have an easy job with so many new players arriving, but it is remarkable how he managed to save his job after four successive defeats in which his side failed to score a single goal and conceded a total of 12.

Everton have since showed some improvement, defeating Sunderland and Bournemouth, but they are now on a three-match winless run and have Arsenal game coming just three days after the Lyon clash.

Ronald Koeman is once again expected to field a strong side for the Europa League clash, but Ross Barkley, James McCarthy, Seamus Coleman, Aaron Lennon, Ramiro Funes Mori and Yannick Bolasie continue to miss out.

Lyon squad also underwent major changes in the summer and the team have somewhat struggled to cope with the busy schedule.

However, les Gones have done much better than Lyon so far this season and they are slowly starting to show additional improvement.

Lyon seriously improved their top 3 hopes with a last-gasp win over reigning Ligue 1 champions Monaco, and they will now attempt to also get closer to Europa League knockout stages.

After sharing spoils with Apollon and Atalanta, les Gones will try and win at Goodison Park and they are 2.75 (7/4) to claim maximum points.

Head coach Bruno Genesio, however, faces serious selection problems ahead of the trip to Merseyside, as top scorer Mariano Diaz and left-back Ferland Mendy picked up injuries at the weekend.

The duo is set to miss the Everton game, just like Clement Grenier, Jeremy Morel and Pape Cheikh Diop.