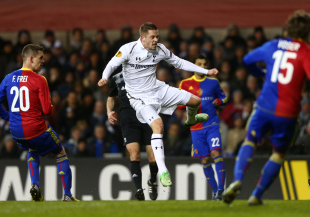 Basel missed the chance to put this tie to bed having squandered a two-goal lead at White Hart Lane, but the Swiss champions, nonetheless, remain in the driving seat.

It is up to Tottenham to try and win in Basel and thus continue their European campaign, but the problem is they have yet to win a European match on the road this term.

Sides coming from the Swiss league never really impress in European competitions, and even if Basel are a class above most other teams from the country, they were not really expected to cause Tottenham too many problems.

However, having eliminated very good Zenit side in the previous round, Murat Yakin’s side entered the match at White Hart Lane full of confidence and taught their more illustrious opponents a real less in football.

Had they been a bit more composed in the final third, there would be nothing to play in the return leg, but team’s inexperience came to the fore as they allowed Tottenham to come from two goals behind and earn a 2-2 draw.

Nevertheless, after winning last four Europa League games at home without conceding a single goal, Basel are 2.63 (13/8) at Stan James to make it five in a row.

Marcelo Diaz has resumed full training after recovering from a muscle problem, but Raul Bobadilla is cup-tied.

Tottenham have started to pay the price for Andre Villas-Boas fielding strong sides in Europa League, with their league campaign beginning to suffer.

Following the 2-2 draw with Everton, Spurs are no longer in the driving seat for the final Champions League berth in the Premiership, although they won’t have to worry about their league exploits at least for another few days.

With their weekend’s match against Chelsea postponed, Tottenham will have some ten days after the Basel match to prepare for the crunch tie against Manchester City, meaning Andre Villas-Boas can field his strongest side in Switzerland.

That is obviously excluding Gareth Bale, Aaron Lennon, William Gallas and Jermain Defoe, who are all pencilled to return against Manchester City.

Huge selection problems are probably the main reason why Spurs are no less than 2.88 (17/9) at bet365 to win the return leg.

If they happen to record a victory in Switzerland, it would be the first away win for Tottenham in this year’s Europa League.