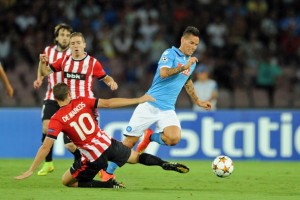 Oddly enough, Athletic and Hertha occupy the bottom two places in Group J ahead of the final two rounds of fixtures, meaning there will be a lot at stake when they square off at San Mames.

Los Leones are one point clear at the moment and with Ostersunds and Zorya also close by, they have a chance to make an important step towards the knockout stages.

Athletic Club traditionally do well in European competitions, but they had a pretty slow start to the 2017/2018 Europa League campaign.

Los Leones were in all sorts of problems after taking mere two points from first three fixtures, but a narrow win over surprise leaders Ostersunds acted as a major boost to their qualifying hopes.

Athletic failed to impress on domestic stage as well, ending a three-match losing run in La Liga with a 1-1 draw against Villarreal, while also sharing spoils with Formentera in Copa del Rey.

This could suggest that a quality showing is long overdue for Jose Angel Ziganda’s side, who can be backed at 1.73 (8/11) to defeat Hertha.

Oscar De Marcos could be available after a three-month absence, while Mikel Vesga returns from domestic suspension.

However, the likes of Iker Muniain, Yeray Alvarez and Benat Etxebarria remain on the sidelines and Unai Nunez is banned.

Sixth-place finish in German Bundesliga saw Hertha return to Europa League group stages after seven years, but they didn’t exactly take the most of the opportunity.

Similar to their next opponents, the German outfit suffered defeats to Ostersunds and Zorya following the opening draw against Athletic, before defeating the Ukrainian side in the return leg.

With two games to go, Hertha sit at Group J rock bottom with 4 points, although they are just three points behind leaders Ostersunds.

As far as their domestic campaign is concerned, Pal Dardai’s men have largely struggled so far, having slipped to 14th in the overall standings.

Hertha will now attempt to get back some of the lost confidence with a good result at San Mames, but that will be no easy task.

There have been some good news on the injury front as both Mathew Leckie and Niklas Stark resumed full training, but Vladimir Darida is set to undergo a surgery on his knee.