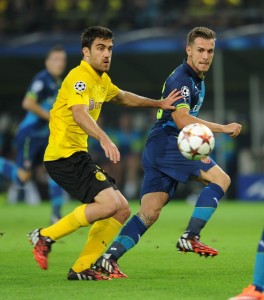 Atalanta failed to hold on to a 2-1 lead in the first leg, conceding two goals in the final third, but they still stand a decent chance of making it to the last 16 stage.

Borussia Dortmund ended up winning the game 3-2 thanks to a Michy Batshuayi brace, although they are aware it will need another strong performance to knock out very good Orobici.

Thanks to some shrewd transfer dealings and impressive work in the youth academy, Atalanta have seriously raised the club’s profile in recent years.

Orobici left some much more famous clubs trailing in their wake as they achieved a fourth-place finish in Serie A last term, and they have since left their mark in Europe as well.

Atalanta finished ahead of Lyon and Everton to win their Europa League group, but were quite unfortunate to be pitted against Borussia Dortmund in the Last 16 stage.

Nevertheless, Orobici held their own in the first leg, coming from a goal behind to take a 2-1 lead, but eventually had to settle for a 3-2 defeat as they conceded in the dying moments of the game.

Gian Piero Gasperini has since rested most key men in the 1-1 draw with Fiorentina and will now recall his strongest side.

After he used midfielder Josip Ilicic up front in Dortmund, the boss is expected to recall Andrea Petagna, with Marten de Roon likely to be dropped.

This season has been full of obstacles for Borussia Dortmund, who are struggling to meet pre-season objectives in Germany and Europe.

The Millionaires returned to second in Bundesliga thanks to three successive triumphs, but they are just two points ahead of fifth-placed RB Leipzig.

Meanwhile, Borussia were pretty disappointing in the Champions League, taking just two points from six group games, and they were somewhat fortunate to reach the Europa League.

The Millionaires experienced problems in the first leg against Atalanta, but ultimately recorded a narrow win that gives them reason for optimism ahead of the trip to Italy.

Borussia players are high on confidence after winning their last four matches on all fronts especially as Marco Reus has made instant impact after returning from a lengthy injury lay-off.

Christian Pulisic and Marcel Schmelzer have minor injuries, while Shinji Kagawa and Andriy Yarmolenko are definitely out.