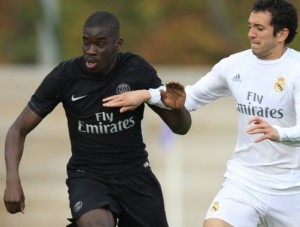 Premier League outfit Tottenham Hotspur have made an official approach to Paris Saint-Germain in attempt to sign the 18-year-old striker Wilfried Kanga, according to France Football.

The exciting prospect made a name for himself during last season’s UEFA Youth League with his goal against Real Madrid in the semi-final of the tournament being a particularly impressive moment for this youngster.

Ivory Coast international is already capped at under-20 level and is currently a free agent as his PSG contract expired at the end of last season.

A versatile and powerful striker, who is adept with both feet, Kanga is a Paris Saint-Germain product who is yet to receive an offer to sign a professional contract with his club and Tottenham Hotspur are willing to exploit the current contract vacuum and sing the hot-shot striker during the summer transfer window.

Known for their incredible youth development work under manager Mauricio Pochettino, who had a direct influence in propelling Eric Dier, Harry Kane and Dele Alli to stardom Tottenham are expected to continue with their youth policy with Joshua Onoham and Cameron Carter-Vickers all lined up to have bright futures at White Hart Lane.

Pochettino is keen to build a team for the future and Wilfried Kanga is seen as a perfect investment and addition to the side which relied mostly on Harry Kane and his fantastic goal scoring exploits in the 2015/16 season.

England forward scored 15 goals in the Premier League to win the Golden Boot, but Spurs had few alternatives for their main man last term. Harry Kane is looking to open his scoring account at the Euro 2016 and is given the odds of 2.4 (7/5) @PaddyPower to bag a goal in England’s forthcoming match against Wales on Thursday.