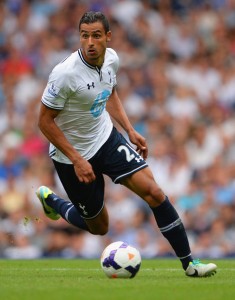 Spurs have won four of their last five games in all competitions, with the last of those victories coming in Greece against Asteras Tripoli in the Europa League while they came from behind to beat Aston Villa last time out in the league.

Aaron Lennon and Emmanuel Adebayor missed the win midweek with minor hamstring injuries, but both are set to recover in time to feature though Kyle Walker and Nabil Bentaleb are both out with respective abdominal and ankle problems.

Erik Lamela is 8.5 (15/2) to open the scoring with most firms, with Christian Eriksen a 9.0 (8/1) chance with Bet 365 while Harry Kane, who has ten goals in all competitions despite not yet starting a league fixture this season, can be backed at 2.38 (11/8) to score at any time with Bet Victor.

Mark Hughes’ side went in to this round of fixtures just two points off seventh place Manchester United despite taking just four points from the last twelve available in the league.

Phil Bardsley and Peter Crouch are both available after suspension, while Marc Muniesa and Marc Arnautovic should both be fit enough to feature despite the latter breaking his hand in training.

Mame Biram Diouf is 11.0 (10/1) to get the first goal of the game with Bet Victor, with ex-Spurs man Crouch available at the same price with the same firm.

Tottenham won both meetings between the sides last season, running out 3-0 winners in North London in the final game of 2013 before edging past their opponents 1-0 at the Britannia Stadium in April.