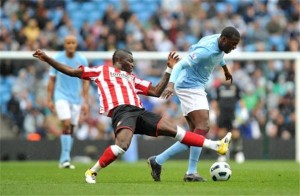 Relegation-threatened Sunderland are likely to face a tough task when they host Premiership leaders Manchester City, with the Citizens looking to make amends for the slip up against West Brom.

Even though Martin O’Neill has been at the helm for just over two weeks, the Northern Irishman appears to have already helped Sunderland return to the right track.

The Black Cats have won seven points from four games under the new boss, which is an amazing result given that they had picked up just 11 in previous 14 games.

The good run of results saw Sunderland finally climb out of the bottom three as well as create a four-point advantage over their relegation rivals.

The Black Cats may not be able to beat their more illustrious rivals, but after scoring in five of last six games, Sunderland are 1.60 (3/5) with Sportingbet to score against City as well.

Following the tremendous start to the season, Manchester City managed to squander the five-point advantage at the top and they are now under big pressure to remain at the top of the standings.

After recording back to back home victories over Arsenal and Stoke, the Citizens couldn’t continue the winning run at the Hawthorns, even if they had dominated large periods of the game against West Brom.

Roberto Mancini’s side now desperately need a win in order to remain at the top of the table and taking into account Sunderland’s defensive problems, odds of 1.57 (4/7) offered by Ladbrokes on away win look too good to pass.

Manchester City do boast a 5-3-1 away record in the Premiership, but they failed to win any of their last three games on the travels, and that has to be taken into consideration when looking for the most popular football bets this weekend.

Full-backs Micah Richards and Aleksandar Kolarov return after recovering from injury, meaning Roberto Mancini can choose from a fully fit squad. The Italian is, nonetheless, expected to make some changes bearing in mind that the derby game with Liverpool is scheduled for Tuesday.