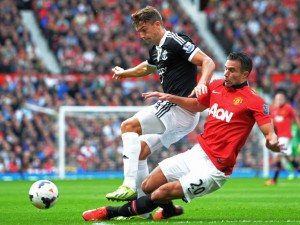 Southampton remained in third position in spite of back to back losses to Manchester City and Arsenal, but another setback could see them leave the top 4 for the first time after quite a while.

Meanwhile, Manchester United hope to cement their position in the standings by recorded the fifth successive triumph in the league.

While Southampton have got to be congratulated for some amazing displays in the opening exchanges, it was only a matter of time before they will suffer a dip in form.

The Saints managed to avoid defeat at Villa Park, scoring late in the game to secure one point, but they could do nothing to prevent holders Manchester City from winning at St Mary’s.

Ronald Koeman’s charges were then somewhat unfortunate to concede a very late goal at the Emirates, although, in all fairness, they did not deserve to get anything from the Arsenal game.

Southampton now hope to return to the right track, but this is not the right time to be facing revived Manchester United.

But, with the Saints winning five straight home games before the Manchester City loss, they are available at 2.80 (9/5) to defeat the other Manchester side.

The hosts will be without midfielders Jack Cork and Morgan Schneiderlin, whilst Toby Alderweireld faces a fitness test.

Louis van Gaal was always saying that he would not be able to bring instant success to Old Trafford and numerous injuries to the playing squad definitely made his job a lot harder.

But, even though Manchester United are still not playing to their potential, their results have improved significantly and they have now made it into the Premier League top 4.

The Red Devils recorded four straight wins in the league and while they were always expected to win home games against Crystal Palace, Hull City and Stoke City, away win over Arsenal certainly acted as a major confidence boost.

Louis van Gaal’s men will now try and take advantage of Southampton’s problems to make it five on the trot, with away win paying 2.70 (17/10).

The good news is that Wayne Rooney, Jonny Evans and Rafael da Silva are back in contention, but the visitors are still missing a number of important players.

The likes of Angel Di Maria, Daley Blind, Phil Jones and Luke Shaw are out injured and they will not travel to St Mary’s.