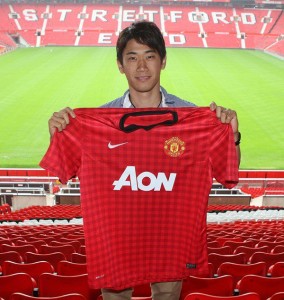 The Japanese midfielder joined the Red Devils in a £17 million deal from BVB this summer, but he only played a couple of minutes in United’s first pre-season friendly against AmaZulu.

Sir Alex Ferguson, however, has now confirmed that Kagawa will start the second friendly against Ajax Cape Town.

“He’s been outstanding,” said Ferguson. “His training performances have been very good. He was three or four days behind everyone else, but he’ll play tomorrow.”

The Scottish manager admits Kagawa has already left a good impression and expects the Japanese to prove to be a great signing for the Red Devils.

“There are similarities to Ji-sung Park. They’re both disciplined, they work hard. Also, they are good professionals and excellent to work with. There will be no problems with him settling into the club.

“What we identified about Kagawa is exactly what I’m seeing now. The difference now is that our players are realising his qualities.

“He’s got quick feet, is two-footed and had a good goal ratio with Dortmund. He’s doing very well.”

Having scored 13 Bundesliga goals for Borussia Dortmund last term, the Japanese is 5/1 to score 16 or over Premier League goals next season, while he is 11/4 to bag between 12 and 15.