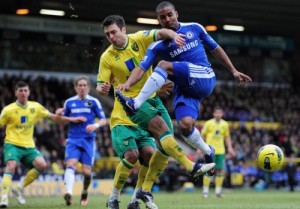 Having ended the three-match winning run at the Hawthorns, Norwich hope to cement their place in the top half of the standings with a good result against Chelsea.

The Blues, on the other hand, are eager to build on the 8-0 victory over Aston Villa and further close the gap behind their title rivals.

Norwich officials did everything they could to help the team avoid the infamous second-season syndrome, having seriously reinforced the squad during off-season, but the Canaries, nonetheless, had a really slow start to the season.

Just when everyone started to believe the Carrow Road outfit would be involved in the difficult relegation tussle, they started to raise their form and embarked on a ten-match unbeaten run (6W 4D) in the league.

Their impressive streak may have come to an end last weekend as Norwich were beaten by West Brom, but after winning their last five league fixtures at Carrow Road, the Canaries look an attractive bet at 6.25 (21/4) offered by BetVictor.

After scoring at least once in last eight games, Chris Hughton’s side are 1.50 (1/2) with Sportingbet to continue the excellent run against Chelsea.

There will be a lot of value in the aforementioned odds if top scorer Grant Holt recovers from a hamstring problem, but Steven Whittaker, John Ruddy, Andrew Surman and Ryan Bennett are all out injured.

While Rafa Benitez was rightly criticized for the poor results at the start of his reign, the Spaniard has got to be given credit for Chelsea’s latest showings.

The Blues may have lost the Club World Cup final to a very good Corinthians side, but that was the only setback in last six games, with the team also recording five convincing victories.

This goes to show that Chelsea have been playing great football under Rafa Benitez, who might prove to be a good option after all.

With the Blues still 11 points behind leaders United, albeit with a game in hand, they have got to try and beat Norwich at Carrow Road, and away win pays 1.67 (2/3) at Paddy Power.

Fernando Torres was the player that most profited from the arrival of his compatriot, and, having bagged 7 goals in last 6 games, El Nino is 2.38 (11/8) with BetVictor to score in this match.

John Obi Mikel returns after serving a three-match ban, but John Terry is out and Ryan Bertrand is doubtful.