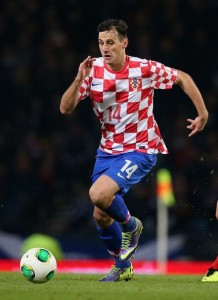 Fiorentina striker Nikola Kalinic is a target for Premier League champions Leicester City, according to the player’s official representative.

It is no secret that the Foxes are in the market for a new centre forward and they have so far been linked with quite a few high-profile footballers.

Croatian forward Nikola Kalinic is reportedly on the Leicester City hit-list, or at least that is what his agent claims.

“It is true, we are aware of the interest from Leicester,” Tomislav Ergic told Jutarnji List. “Anything is possible, but there is no need to rush. The transfer window has only just opened.”

Nikola Kalinic has fared pretty well since joining Fiorentina from Dnipro last summer, bagging a total of 12 goals in 36 Serie A appearances.

He represented Croatia at the Euro 2016 finals and managed one goal in two appearances, scoring in a 2-1 triumph over Spain.

The Foxes have already recruited Ron-Robert Zieler, Luis Hernandez and Nampalys Mendy, while Ahmed Musa is set to join as well.