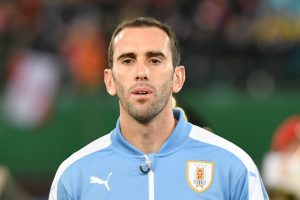 Manchester United’s search for a new centre-back has taken them to Spain and Atlético Madrid defender Diego Godin.

According to Sky Sports, Jose Mourinho’s Red Devils have enquired about the Uruguayan and a potential move to Old Trafford. However, it has been revealed that the 32-year-old is not interested in a switch to the Premier League and is instead in negotiations for a new contract.

United’s search for a new defender throughout the window has been well-broadcast. They have previously held interest in Jerome Boateng and Harry Maguire but neither move has failed to materialise.

Eric Bailly is one of Mourinho’s first-choice centre-backs, whilst there is also Chris Smalling and Phil Jones at the club. Victor Lindelöf struggled in his first season in England following his move from Benfica. Meanwhile, Marcos Rojo appears close to an exit, hence Mourinho’s desire for another defender.

As it stands, Harry Maguire is 7/4 with bookmakers William Hill to make the move to Old Trafford before Thursday evening’s deadline. Intriguingly, should the former Hull City man make the move to Manchester, he will be reunited with his former teammates almost immediately as Leicester do battle with Jose Mourinho’s troops in the Premier League’s opening game on Friday night.