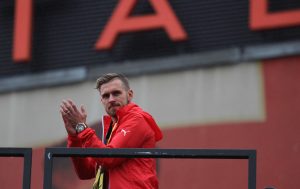 Liverpool are reportedly interested in recruiting Arsenal midfielder Aaron Ramsey, according to the Daily Mirror.

The Welshman only has a year left on his contract at the Emirates Stadium and will apparently not be renewing his deal with Unai Emery’s men. The report also reveals that the Merseyside outfit had an offer knocked back in the summer months and will be returning for his signature either in January, or in the summer when the midfielder will be available on a free transfer.

He would become the second Gunner to switch the Emirates for Anfield in recent years following Alex Oxlade-Chamberlain’s move to Liverpool. Juventus are also apparently interested in swooping for the 55-time Welsh international.

Ramsey, 27, has been with Arsenal since 2008 after signing from Cardiff City. He has made 339 appearances for the Gunners in that time, scoring 58 goals. His best season came in 2013/14 as he scored 16 goals in all competitions, including ten in only 23 Premier League appearances. Ramsey has appeared in ever league game so far this season and has provided two assists.

According to BetVictor, Liverpool are at 10/1 to be Ramsey’s next permanent employers. However, he is more likely to make the switch to Serie A with any Italian club priced at 6/1.