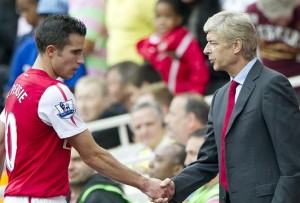 Soon after Dutch striker Robin van Persie announced that he would not be extending his contract at the Emirates, Arsenal chairman Peter Hill-Wood was quick to deny reports that the Dutchman would be sold this summer.

Nevertheless, the Gunners have now confirmed they have received a number of official bids for the unsettled striker and it is now only a question of where RVP will end up.

Ladbrokes have made Manchester City 10/11 favourites to get the Dutchman, whereas Manchester United are surprisingly just 5/4.

Juventus are not hiding they are on the lookout for a high-profile striker and they have been heavily linked with a move for Van Persie. The Bianconeri are no less than 5.00 (4/1) with Ladbrokes to win the race for the highly rated forward.

“Arsenal appear to have given up hope of van Persie signing a new contract and now the option would be to sit back and see who makes the best bid, which looks likely to be moneybags Manchester City,” said Hill’s spokesman Joe Crilly.

The 28-year-old striker has scored a total of 96 goals in 204 Premier League games for Arsenal, but his 48 Premiership goals over the last two seasons are the reason why so many high-profile clubs are vying for his signature.