Hector Bellerin being monitored by Arsenal ahead of Liverpool clash 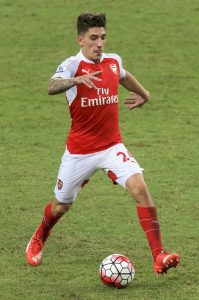 Arsenal defender Hector Bellerin will continue to be monitored ahead of the Gunners’ clash with Liverpool at the Emirates Stadium on Saturday.

The Spanish fullback has been ruled out of action with a muscle problem after being withdrawn at half-time in Arsenal’s 2-2 draw with Crystal Palace at the weekend.

Arsenal boss Unai Emery has already confirmed that Bellerin will miss the Gunners’ match with League One outfit Blackpool on Wednesday but did elude that he could return once Premier League action resumes.

Talking ahead of the Blackpool game, Emery said: “Yes, he’s injured. I hope it’s not a big injury but he had muscular pains.

“I don’t know [if Bellerin can play at the weekend].”

Emery will hope that the full-back can return in just time for the clash with the Reds with numerous defenders having already succumbed to problems. Laurent Koscielny, Sead Kolasinac, Nacho Monreal and Konstanstinos Mavropanos are all restricted to the sidelines.

Bellerin has enjoyed a positive start to the current campaign, providing four assists in his opening ten games in all competitions.

The former Barcelona youngster can be backed at 22/1 with William Hill to score the opening goal against Blackpool at the Emirates on Wednesday evening.