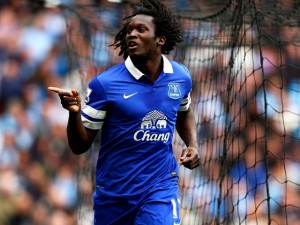 Everton have smashed their club transfer record after completing the signing of Romelu Lukaku on a permanent deal from Chelsea for £28m.

The Belgium international spent a successful season on loan with the Toffee’s last year, contributing to twenty-one goals – the best return by any player for the Merseyside club since Andrei Kanchelskis in the 1995/96 campaign.

The 21 year old is Roberto Martinez’s third major signing of the summer following Bosnia and Herzegovina midfielder Muhamed Besic and Gareth Barry, who like Lukaku impressed on loan in the Spaniard’s first season in charge.

With Ross Barkley penning a new long term deal at Goodison Park this week the future looks bright for Everton, who begin the forthcoming campaign with a trip to newly promoted Leicester City, where they can be backed at a best price of 2.4 (7/5) with Bet Victor to take all three points.

They then have back to back home games against title favourites Chelsea and fellow Champions League side Arsenal, and Sky Bet offer 17.0 (16/1) for them to take nine points from their first three games.

Last season’s tally of seventy-two points was their highest ever since the inception of the Premier League, and Sky Bet offer 1.83 (5/6) for them to get over 62.5 points this time around.

Come May, it will be twenty years since Paul Rideout’s goal secured a 1-0 victory over Manchester United in the FA Cup final at the old Wembley stadium – the last time they won a trophy, and Stan James offer 11.0 (10/1) for them to lift any silverware during the campaign.