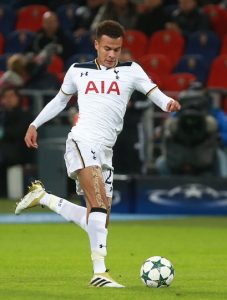 According to Sky Sports, the 22-year-old has agreed on an extended stay with Mauricio Pochettino’s men. The report reveals that the two parties have been in dialogue for some time over renewing his original deal that was set to expire in the summer of 2022.

Alli would become the latest to commit his future to the club after manager Pochettino and star striker Harry Kane both also elected to remain with the club signing new deals in recent times.

The midfielder has become a key player for Spurs since joining from Milton Keynes Dons in 2015. He has made 152 appearances for the club, scoring 48 goals and providing a further 41. His best season came during the 2016/17 campaign as he bagged 22 goals in all competitions.

The 31-time England international as been ruled out for the past month with a hamstring injury but could potentially make his return to action as Tottenham host Manchester City on Monday evening.

Alli scored in both of his appearances against the Citizens two years ago and can be backed at 15/1 with BetVictor to open the scoring at Wembley Stadium against the reigning Premier League champions.