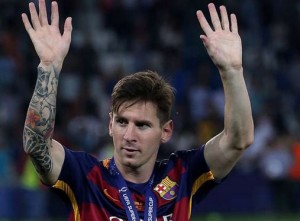 Roman Abramovich has had a meeting with Lionel Messi’s father just hours after the final verdict on tax fraud when Barcelona star and his father were found guilty and sentenced to 21-month jail time and a €2 million fine.

The Sun reports that Roman Abramovich and Jorge Messi met on the Russian billionaire’s yacht and that Blues owner is ready to offer Barcelona a fee in excess of £110 million for the signature of the Ballon d’Or winner.

The tabloid goes on to suggest that Lionel Messi could be given a whopping £800,000-a-week deal at Stamford Bridge, which would make him the highest paid footballer in the world.

Having in mind that Chelsea are not involved in any European competition this season, the summer transfer is highly unlikely, but Roman Abramovich reportedly wanted to make sure that Chelsea were put in pole position for Messi’s signature should Argentine star decide to quit the Catalan giants.

Lionel Messi has repeated in numerous occasions that he will not be leaving Barcelona and that he would finish his professional career at Camp Nou.

However, Chelsea re hopeful that latest tax fraud developments could change Messi’s mind as Argentine grows disappointed with treatment in Spain.

The 29-year-old forward has made 33 La Liga appearances last season, helping his team to the Spanish title with 26 games on his tally.

Barcelona have been made firm favourites to regain the La Liga trophy next season and can be backed at the betting odds of 1.73 (8/11) @Bet365.