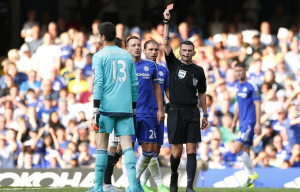 Premier League holders Chelsea have decided to launch an official appeal against the red card keeper Thibaut Courtois received for a foul on Bafetimbi Gomis.

The Belgium hotshot was dismissed at the start of the second half after fouling the Swansea striker on the edge of the box, with the Frenchman converting the resulting penalty to make it 2-2.

However, while there were no doubts that Courtois had committed a foul, the Blues believe Gomis was not denied a goalscoring opportunity, with two defenders appearing to have closed him down.

Chelsea hope that their appeal will prove successful, in which case the goalkeeper will return to the side for Sunday’s clash with Manchester City, where the Blues are 3.80 (14/5) to emerge victorious.

Should their appeal is unsuccessful, summer signing Asmir Begovic will start in goal, having impressed after coming on as a second-half substitute last weekend.

Chelsea will want to make amends for the opening draw with Swansea, but Manchester City clearly head into the game in better spirits having hammered West Brom 3-0 on Monday.