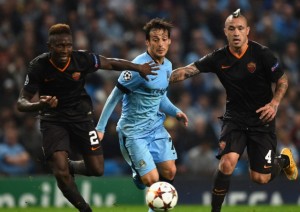 The Times is reporting that Premier League leaders Chelsea are set to reignite their interest in AS Roma hotshot Radja Nainggolan.

It is no secret that the Blues manager Antonio Conte is a big fan of the Belgian footballer and he already attempted to lure him to Stamford Bridge in the summer.

And now that Oscar has sealed his move to Shanghai SIPG, the Italian manager is ready to launch a fresh assault on the 28-year-old midfielder.

It was Nainggolan himself who rejected a move to Chelsea in the summer, but with the Blues since emerging as strong favourites for the Premier League campaign, the Belgium international could change his mind.

The experienced footballer has a knack for scoring important goals in derby fixtures and he recently got on the scoresheet in victories over AC Milan and Lazio.

Having opened up a six-point lead at the Premier League summit, Chelsea can now be backed at 1.73 (8/11) to go all the way.