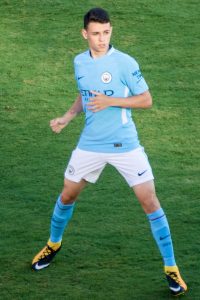 According to Mail Online on Sunday morning, the club want to team Foden up with former Manchester City teammate Jadon Sancho, who has started the 2018/19 season in fine form.

The report also states that other European clubs are tracking the youngster’s development at the Etihad Stadium, with a couple of those being RB Leipzig and French champions Paris Saint Germain.

City boss Pep Guardiola has repeatedly stated that he sees a bright future for Foden at the club after progressing through the academy. He was a key part of the England side that won the under-17 World Cup in 2017. He has so far made 15 first-team appearances for City and scored his first goal for the club in a 3-0 win over Oxford United in the Carabao Cup earlier this season. However, the 18-year-old’s contract is set to expire in 2020, which could explain the interest in him.

Foden could next be action for the England U21’s against Scotland on Tuesday. The Young Lions won 7-0 against Andorra in his first match for the side and they can be backed at 5/6 with Coral to notch another victory.