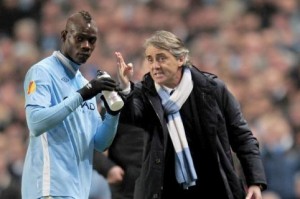 Italy forward Mario Balotelli has moved to reject speculation suggesting that he is at odds with Manchester City manager Roberto Mancini.

The highly rated forward, who impressed as Italy beat Denmark on Tuesday evening, is adamant he has a great relationship with the Italian coach.

“With Mancini all goes well, we have a good relationship even though someone always tries to put discord among us. We love each other,” Balotelli told Rai Sport.

However, the 22-year-old doesn’t have such a good relationship with other club officials.

“I’m fine at Manchester City even though there are people who like to talk in the newspapers, instead of saying certain things to my face. I don’t give a damn.”

Mario Balotelli has yet to score a league goal this season, and he is 2.30 (13/10) with Sportingbet to do so in next match away to West Brom.

The Italian, on the other hand, is 10.00 (9/1) with Stan James to be club’s top league goalscorer this season.