England U21 vs Croatia U21 Preview 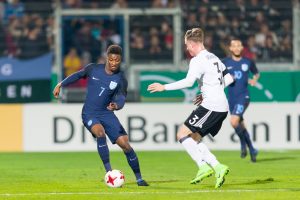 England U21s will have one final chance to impress at the UEFA Euro U21 Championships on Monday as they take on Croatia.

The two teams come together at the San Marino Stadium having both already been eliminated from the tournament following a bitterly disappointing group stage. Neither side have picked up a point as of yet throughout the tournament but that is sure to change as they come together. The Young Lions sit at a price of 4/5 with Coral to get their first win, whilst Croatia can be backed at 16/5. A draw meanwhile is at odds of 3/1.

The main problem with both sides has been their inability to keep the ball out of the back of the net. In only two matches, England have conceded six goals, whilst Croatia are only doing marginally better having shipped five. As a matter of fact, games involving both sides throughout the tournament have averaged 3.75 goals per 90 minutes. That trend to continue in this match with over 3.5 goals can be backed at a price of 31/20 with Betfair.

Another major problem that both England boss Aidy Boothroyd and Croatia manager Nenad Gračan have had throughout the tournament is getting the best out of their extremely talented squads. The Young Lions in particular have severely fallen below expectations considering the amount of established Premier League stars that they have taken to France. One man has been under-used though and that is striker Tammy Abraham. The forward struck 26 goals for Aston Villa last season and is at 7/2 with Paddy Power to add to his strike against Romania with the opening goal in this game.

Despite Croatia not possessing a squad as well known as the Young Lions’, they still have plenty of talent. For instance, Sandro Kulenovic is at odds of 7/1 to open the scoring on Monday.

Considering that both teams have already been eliminated, there could be plenty of changes seen in both starting XIs. Josip Brekalo could return to the Croatia side having recovered from injury and could be joined by skipper Alen Halihovic after he was surprisingly left on the bench for the 1-0 loss to France last time out. Regarding England, defensive midfielder Hamza Choudhury is back in contention after serving suspension. Phil Foden should also be welcomed back after being restricted to a place on the bench against Romania. Finally, Ezri Konsa, Lloyd Kelly, Morgan Gibbs-White and Reiss Nelson have all not featured so far so could well be afforded minutes.