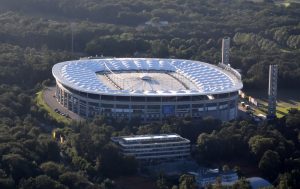 Chelsea will look to continue their charge in the UEFA Europa League as they travel to the Commerzbank-Arena on Thursday night to take on surprise package Eintracht Frankfurt.

The Blues are currently in a battle to get into the Premier League top four and with it UEFA Champions League football, so the Europa League could be an excellent method for Maurizio Sarri’s men to return to the top table of European football.

Before they do that though, they have to get a result in Frankfurt – a much tougher task than most will be predicting. In 58 games on home soil in Europe, Die Adler have only lost five. As a matter of fact, their last European defeat at home came during the 2006/07 season, falling 2-1 to Serie A outfit Palmero in the UEFA Cup. That could potentially explain why Chelsea are slight underdogs and available at a price of 17/10 with Betfred to win the game. Meanwhile, Adi Hutter’s troops are priced at 7/4, with a draw being available at 12/5.

However, Maurizio Sarri’s men will arrive in Germany with an excellent away record in the Europa League so far this season. The West-Londoners have scored in every single game away from Stamford Bridge, keeping four clean sheets in the process and are at 12/5 to notch another shut-out. Meanwhile, Frankfurt have only conceded two goals at home during this season’s competition so surely something has to give with the visit of the Blues.

The main threat to those prospective clean sheets could be the two teams’ frontmen, both of which have been in stunning form in the Europa League this season and lead the goalscoring charts. Blues striker Olivier Giroud has found his best form in Europe this season and has ten goals in the competition, whilst his counterpart Luka Jovic has also hit eight of his own. The Frenchman is at odds of 6/1 with Paddy Power to score the opener, whilst Jovic is at a price of 5/1.

Elsewhere though, Sarri does have a few injury problems. Antonio Rudiger’s season is over after he suffered a knee injury against Manchester United. The German joins Callum Hudson-Odoi, Ethan Ampadu and Marko van Ginkel on the sidelines until at least the start of next season. Elsewhere, wideman Willian is suffering with a knock but could potentially be fit enough to start. Regarding Frankfurt, Marc Stendera could be ruled out with a back injury for the game, whilst forward Sebastien Haller has an abominal strain so could be a doubt. Taleb Tawatha is also likely to be ruled out with an ankle injury. The main headline though is the absence of Ante Rebic who is suspended.