Eden Hazard ruled out for three months with ankle injury 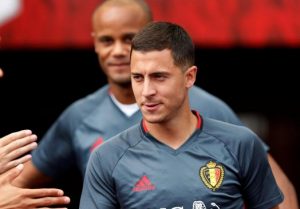 Chelsea star Eden Hazard is set to miss the beginning of next Premier League season after fracturing his ankle in training with Belgium this week.

The Belgian Football Association confirmed on Twitter that Hazard twisted his ankle, whereas subsequent tests revealed the 26-year-old will require a surgery that will place him on the sidelines for the next two to three months.

Not only will Hazard miss Belgium’s Monday friendly against the Czech Republic and their World Cup qualifier against Estonia on 9 June, but Chelsea star is poised to miss the start of the 2017/18 season.

The Belgian star still has three years to his contract at Stamford Bridge, but has been constantly linked with a move to Real Madrid.

The latest injury blow came on the same day when Eden Hazard hinted he could be tempted to quit the Blues for a move to Los Blancos.

Asked about the possibility to leave Chelsea for a Santiago Bernabeu move, Eden Hazard replied “never say never”, before adding that “we all have our dreams”.