Eden Hazard out of Chelsea’s Europa League clash with PAOK 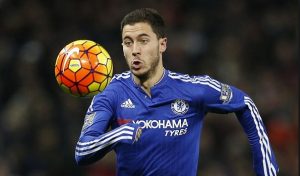 Chelsea midfielder Eden Hazard has been ruled out of the Blues’ clash with PAOK on Thursday night.

The mercurial Belgian had been restricted to the sidelines due to a back injury. Despite recovering, he has now sustained an ankle problem and will not feature against the Greek outfit but could be back in action as soon as this weekend, Chelsea boss Maurizio Sarri has revealed.

Talking ahead of the match, the Italian said: “Hazard is not a serious injury.

“He will not be able to play tomorrow but I think we will be able to recover him for the next Premier League match.”

The Blues host the Greek outfit top of Group L and having already qualified for the next round of the Europa League. They have won all four of their games so far in the competition and have only conceded one goal in that time. They won their previous clash with PAOK back in September 1-0 thanks to an early Willian strike.

As a result, the 2014 Europa League winners are clear favourites to notch three points again this time around, even without Hazard. They can be backed at 1/3 to win at Stamford Bridge with Coral. Willian sits at 6/1 with BetVictor to open the scoring again.