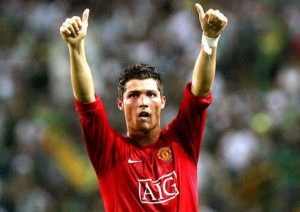 Growing reports in leading European media outlets continue to add fuel to speculation that Cristiano Ronaldo could leave Real Madrid at the end of the season and return to Old Trafford.

The Portuguese superstar is reportedly disappointed with his club’s lack of support over a £13 million tax storm that hit Cristiano Ronaldo over the past couple of days, and the 32-year-old striker is believed to have set his sights on leaving Spain.

After eight years of service with the club he insisted would remain at until the age of 41, Cristiano Ronaldo is now reportedly ready to cut his stay at Santiago Bernabeu short.

The Sun claim he has even instructed his agent Jorge Mendes to push through a return to Manchester United.

Ronaldo left the Red Devils in 2009 and has gone to win three Champions League titles with Los Blancos. He cost a record £80 million and would break it once again if a move away from Madrid is to be realized.

A couple of Chinese clubs are thought to be interested in Ronaldo, together with Paris Saint-Germain, but the player himself is thought to be keen on a dream return to Manchester United. The Premier League club would open their favourite son with open arms and, according to the Mirror, are prepared to fork out whopping £175 million plus David De Gea in order to see Ronaldo back.

The only possible complication could be Ronaldo’s deteriorated relationship with Jose Mourinho, after the pair fell out in Mourinho’s final year at Madrid.

Being two great professionals as they are, Ronaldo and Mourinho would surely find a way to bury the hatchet for a great good.

The bookies have already opened the market and see Ronaldo at 3.25 (9/4) betting odds as a possible Manchester United summer signing.