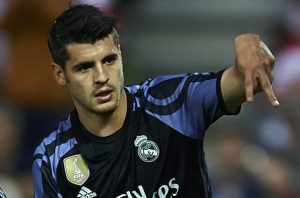 Premier League champions Chelsea have thus far had a sluggish start to the transfer window whereas direct league rivals have mostly been proactive in the summer.

The Blues manager Antonio Conte is believed to be keen on landing several new players before the start of the season, but Chelsea are yet to make a significant move.

Transfer window inactivity and the club’s inability to land Everton striker Romelu Lukaku has even led to speculation that Antonio Conte could leave the club but those rumours are far-fetched.

Having lost any chance to re-sign their former player and Belgian international Lukaku, Chelsea are prepared to explore alternative options and two names have already been highlighted.

With Diego Costa ready to leave Stamford Bridge, Antonio Conte now feels another Manchester United target and the man he worked with while at Juventus, Alvaro Morata, could be the perfect addition to the squad.

Manchester United are unlikely to continue their chase for the Spanish international now that Lukaku is on the verge of joining the Old Trafford outfit and Conte is ready to pounce for the 24-year-old. The Spaniard is currently available at 3.25 (9/4) betting odds to move to Chelsea this summer.

Additionally, the Italian manager is looking at his compatriot Andrea Belotti.

The highly-rated Torino superstar has emerged as one of the hottest commodities thanks to his impressive performances in the Serie A, but his price tag of €100 million has thus far kept all interested parties at bay.

The Italy international racked up impressive 26 goals for Torino and managed 7 assists in his team’s run to the 9th place in the Serie A table.