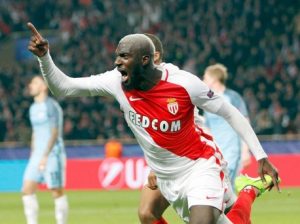 Weeks of speculation are about to be concluded with the best possible news for the Chelsea fans who look set to welcome what will become the latest addition to the Premier League winning side.

The Times reports today that the Blues have agreed a £39.8 million deal plus appearance related bonuses to sign the highly-rated AS Monaco midfielder Tiemoue Bakayoko.

Chelsea reached the final agreement with the French champions on Wednesday night, thus beating Manchester United to the signature of the French midfielder who is expected to undergo medical examinations over the next 48 hours.

The 22-year-old Bakayoko was an integral part of AS Monaco’s Ligue 1 title winning side last season.

The Principality club made a deep mark on the European stage as well, reaching the Champions League semi-final before getting knocked out by runners-up Juventus.

Bakayoko’s move to Chelsea was seemingly confirmed by the player’s brother Abdoulaye on social networks who posted an image of a black background with the caption CFC, accompanied by the blue dot and a strong-arm emoji.

The arrival of the AS Monaco midfielder could spell trouble for the Serbian international Nemanja Matic at Stamford Bridge.

Former Benfica midfielder has been heavily linked with a move away from London with Inter Milan and Manchester United both willing to take the Serbian onboard. Jose Mourinho is thought to be having an upper hand being a manager Matic worked with at Chelsea before.

Chelsea are expected to make additional moves in the transfer market and bolster their forward line after missing out on Belgium striker Romelu Lukaku. With Diego Costa set to leave Blues, Antonio Conte will have to bring in fresh blood in attack if he intends to lead Blues to title defence next season.

Chelsea can be found at 7/2 betting odds to lift the Premier League trophy again next season.