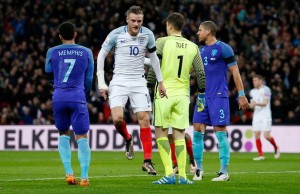 Leicester City boss Brendan Rodgers has said he does not expect striker Jamie Vardy to come out of international retirement.

The forward originally retired from England duty following the 2018 World Cup. There has been some speculation that the 32-year-old could return following the injury suffered by Harry Kane in the 1-0 win over Manchester City in the UEFA Champions League on Tuesday night, putting his inclusion in this summer’s UEFA Nations League in doubt.

However, Rodgers suggested that a return for Vardy is looking unlikely at the current time.

Talking ahead of Friday evening’s clash with Newcastle United, the Foxes boss said: “Jamie’s made his decision on England – there’s nothing more to say on it.

“It’s not my job to try and talk him out of retirement, he’s very happy where he is. He gives his maximum in every training sessions, he plays in all the games.

“He is such an intelligent player, a top player, but he has made his decision internationally. He did it not just for football reasons, he did it for family reasons.”

Vardy has been in tremendous form since the arrival of Rodgers at the King Power Stadium having scored eight goals in as many games. He is one of the favourites to open the scoring against the Magpies at a price of 11/4 with Betfair.