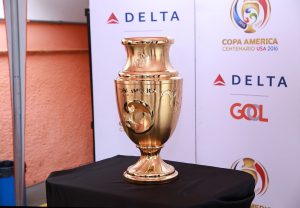 Brazil will be looking to lift their ninth Copa America title on Sunday as they take on Peru in the final at the Maracanã.

Arguably one of the tournament’s favourites, the Selecao take on a Peru side looking to lift the title for only the third time in the nation’s history. Tite’s men last won the tournament back in 2007, with Peru not tasting victory since 1975. Naturally, Brazil are overwhelming favourites to lift the trophy and are available at a price of 1/8 with Coral, whilst Peru can be backed at 9/2.

One aspect that could see Brazil take yet another crown is their defensive solidarity, not only throughout the tournament but in all competitions before that. They have not tasted defeat in any of their last 15 matches in all competitions. A huge factor behind that has been their defensive solidarity having not conceded a single goal since a 3-1 victory against the Czech Republic way back in March. They now have the opportunity to keep their eighth consecutive clean sheet for the first time ever in the country’s footballing history. Brazil can be backed at a price of 8/11 with Betfred to win the game to nil yet again.

Ironically, the two teams have already met during the Copa America in the final match of the group stage. On that occasion, it did not go Peru’s way at all as Brazil ran out 5-0 winners on the day. Ironically though, both sides required penalties to progress beyond the quarter-finals against Paraguay and Uruguay following their meeting. Either side to win on penalties this time around can be backed at 16/1 with William Hill.

Despite heading into the final as favourites, Tite has a few injury problems to contend with. Chelsea winger Willian has already been ruled out of the final with a thigh injury. Richarlison is also a major doubt through illness and is expected to join Fernandinho on the sidelines. However, Filipe Luis could be fit enough to return to action. Peru have constantly altered their starting line up throughout the tournament but are this time likely to name an unchanged lineup from the semi-final victory against Chile. Forward Guerrero will hope to continue his good form having scored two goals at the tournament so far.

Manchester City star Gabriel Jesus is the favourite to open the scoring during the game and can be backed at odds of 3/1 with Paddy Power to hit the opening strike. Elsewhere, Guerrero is the favourite to score first from the perspective of Peru and sits at 21/2.