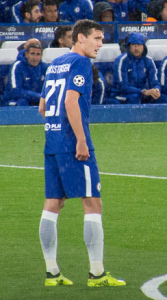 Borussia Monchengladbach are not planning on bringing former loanee Andreas Christensen back to the club for a second spell.

The Danish centre-back spent a temporary spell with the German outfit between 2015 and 2017 on-loan from Chelsea. He made 82 appearances in all competitions, slowly establishing a reputation as one of the most promising defenders in Europe.

Upon his return to Stamford Bridge, the Dane made 27 Premier League appearances under former Blues boss Antonio Conte. However, he has found game time hard to come by during the current campaign having only appeared in the Carabao Cup and the UEFA Europa League, leading to reports that he could be looking for an exit from the capital club.

One of the favourites to swoop for the centre-back was former employers Monchengladbach. Despite that, sporting director Max Eberl told Sky Sports Germany that he was happy with the options at the club’s disposal and that it would take for too much to bring Christensen back to the Borussia-Park.

He said: “We’ve got an outstanding relationship with Andreas but the topic is not currently on.

“We’ve got a top central defensive partnership, with Mathias Ginter and Nico Elvedi.

“Although we have some money to spend, I’ve heard that Chelsea will only sell Andreas if they allow him to leave, and the amount they will ask for is very large.”

Christensen can be backed at 50/1 with BetFred to open the scoring as Chelsea take on Burnley at the weekend.