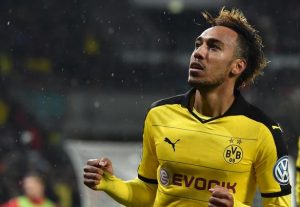 Bundesliga heavyweights Borussia Dortmund are ready to let their star striker Pierre-Emerick Aubameyang go at the end of the season as club’s chief executive Hans-Joachim Watzke confirmed that the BVB will listen to offers for the Gabon international.

Pierre-Emerick Aubameyang has been the centre of attention with the host of the biggest clubs in Europe, with Premier League club Manchester City and French champions Paris Saint-Germain already approaching the striker last summer.

The free-firing Gabon international has enjoyed a steady goalscoring form over the past few seasons for Dortmund and it appears that both the club and the player are ready for the new challenge.

The German club have this week signed the Swedish prodigy striker Alexander Isak, who is tipped to make a big name of himself in the future. The talented teenager has been often compared to his more prominent compatriot Zlatan Ibrahimovic due to his physique and playing style, and many believe Isak could go on to become a future world star.

Borussia Dortmund have successfully beaten Real Madrid to the signature of the rising star and are apparently ready to make him the natural successor of Aubameyang.

Watzke confirmed that Pierre-Emerick Aubameyang could be allowed to leave for a fee of €80 million, which could have world’s biggest club make a formal approach for the player in the summer.

Aubameyang has never hid his long-held ambition and dream to become a Real Madrid player in the future, and Los Blancos could be tempted into making a move for the Gabon international as they have now missed their chance to snatch Alexander Isak.

Aubameyang scored 20 goals in as many appearances across all competitions this season, while he also scored twice in three games at the Africa Cup of nations, before Gabon got eliminated at the group stage.

Borussia Dortmund are resting fourth in the league at the moment, trailing behind Bayern Munich, RB Leipzig and Hoffenheim.

Tuchel’s men continue their Bundesliga exploits on Sunday at Mainz and could be found at 1.60 (3/5) @Bet365 to claim all three points.