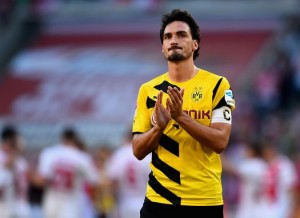 Borussia Dortmund have opened negotiations on a potential return for former defender Mats Hummels, according to reports.

According to reports in Bild, talks are at an advanced stage between the two sides. Further suggestions also report that a transfer fee of approximately €30m would likely be enough to see the German move back to the Signal Iduna Park.

The now 30-year-old central defender switched to Bayern from Dortmund initially in July 2016. Since then, the World Cup winner has gone on to make 118 appearances, winning three Bundesliga titles and a DFB-Pokal title. However, he was in and out of the side at the Allianz Stadium under Niko Kovac, making only 20 league starts throughout the campaign.

He is likely to find his place under even more threat next season with the imminent arrivals of Lucas Hernandez and Benjamin Pavard from Atletico Madrid and VfB Stuttgart respectively. Thus, a return to his former club where he is likely to be afforded comparatively more opportunities could make sense.

With Hummels’ arrival, Dortmund will hope to challenge for the Bundesliga title yet again next season. They went close throughout 2018/19 but just missed at to Bayern Munich yet again.

Die Schwarzgelben are currently available at a price of 9/2 with William Hill to win the 2019/20 Bundesliga title.