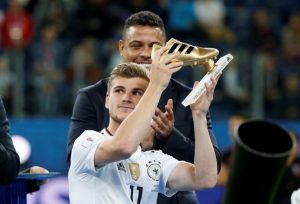 Bayern Munich have agreed terms with Timo Werner over a potential move to the Allianz Arena, according to reports in Germany.

As per SportBild, the German frontman is interested in a switch to Bavaria and has agreed terms with the reigning Bundesliga champions despite reported interest elsewhere from Liverpool, Real Madrid and Paris Saint Germain. Despite that, Bayern and Werner’s current club RB Leipzig have yet to agree on a fee for his signature, with the reports suggesting it could take over €60m to convince Die Roten Bullen to sell.

The 22-year-old’s contract is set to expire in the summer of 2020 so Bayern could well be prepared to wait and sign him on a free transfer.

Werner has made 102 appearances for Leipzig in all competitions, scoring 55 times and providing 20 assists. He has scored 13 goals so far this season but has not managed to find the back of the net since late December. The forward has also made 23 international appearances for Germany and has netted nine times.

Leipzig currently sit fourth in the Bundesliga standings ahead of this weekend’s clash with Nurnberg away from home. Werner can be backed at odds of 10/3 with BetVictor to score the opening goal of the game.