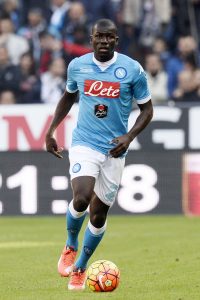 Barcelona are eyeing a big-money swoop for Napoli defender Kalidou Koulibaly, according to reports in Italy.

Corriere dello Sport report that the Italian giants have slapped a huge £88m asking price on the defender with Barca interested in a swoop. Despite that, the Spanish giants have not been deterred by the eye-watering fee and would still like to bring the Senegalese centre-back to the Camp Nou.

Ernesto Valverde is keen to bolster his defensive options at the club with regular centre-back Samuel Umtiti ruled out with a long-term injury. They also have Gerard Pique, Clement Llenglet and Thomas Vermaelan available to play at the back.

Koulibaly has spent four years with Napoli since a move from KRC Genk in 2014, becoming one of the top defenders in Europe in that time. In his period in Naples, the 27-year-old has made 174 appearances for the club and has scored eight goals and provided five goals. He was a key player as Napoli finished second in Serie A last season.

Koulibaly still has just under five years remaining on his contract at the Stadio San Paolo.

Napoli face off with Udinese in Serie A on Saturday and the defender can be backed at 22/1 with BetVictor to score the opening goal of the game.