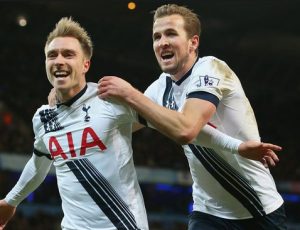 Tottenham striker Harry Kane and playmaker Christian Eriksen are being followed by Barcelona, who had their scouts at Santiago Bernabeu this week according to reports from Mundo Deportivo.

Spurs duo are being closely watched by the Catalan giants as Barcelona sporting director Robert Fernandez himself was in attendance for the clash against bitter rivals Real Madrid in the Champions League group stage clash.

The Premier League side held out for a bravely fought 1-1 draw with Christian Eriksen and Harry Kane once again putting impressive displays.

The English striker has been in sensational for his club over the past year and his goalscoring exploits have made him one of the most sought-after strikers in the world. Real Madrid have been credited with an interest in the 24-year-old forward whereas Barcelona are also prepared to get in the chase.

Barcelona chief Robert Fernandez was in Madrid to have another look at Christian Eriksen as well. The former Ajax playmaker has been on the Spanish club’s radar for quite some time and the Catalans could reignite their interest given the fact they are ready to abandon their pursuit of Liverpool star Philippe Coutinho.

Tottenham are unlikely to give up on their star duo that easily and are expected to ask for a world-record fee for their in-demand striker and playmaker.

Real Madrid have already been linked with a £150 million swoop for Harry Kane but Spurs will not accept anything less than £200 which is the amount Barcelona got for Neymar.