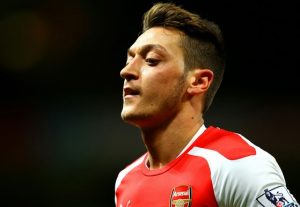 Spanish powerhouse Barcelona are thought to be thinking about a move for Arsenal superstar Mesut Ozil.

Italian media outlet TMW reports that the Catalan giants have reignited their interest in Germany international, who has already been linked to a shock Barcelona move back in the winter.

Barcelona are thought to be in the market for a central midfielder and Mesut Ozil seems to be another high-profile name to be linked with a move to Camp Nou in addition to Liverpool superstar Philippe Coutinho.

Unlike the Brazilian international who has recently signed a new deal with the Anfield outfit, Mesut Ozil’s future at Arsenal remains in doubt. The German maestro has failed to pledge his future to a new long-term deal and is said to have delayed contract talks until the end of the season.

According to reports, however, Mesut Ozil will not be extending his deal with the Gunners as his heart is set on leaving north London following yet another trophyless season. The 28-year-old playmaker has endured mixed fortunes this season and has once again been frequently singled out with for not performing in high-profile games.

Despite the criticism, Mesut Ozil racked 11 goals and as many assists this campaign for Arsenal, proving once again he is a valuable asset for Arsenal.

The German international is said to be demanding a £10.5 million salary to move to Camp Nou and make a sensational return to La Liga, where he played under Jose Mourinho at Real Madrid until 2013.

Ozil’s future will depend on Arsenal’s top-four chances which are on the ropes following the 2-0 defeat at the hands of Tottenham.

Arsenal are preparing for yet another stern challenge this weekend as Arsene Wenger’s men are due to face Manchester United at the Emirates.

The Gunners are priced at 2.00 (1/1) to grab important three points against Red Devils.