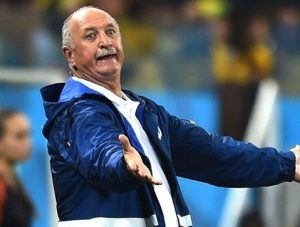 Australia head towards 2018 without a manager in charge of their national football team and the Socceroos Football Federation faces a big decision ahead of the FIFA World Cup in Russia.

Australia qualified for the showpiece tournament after beating Honduras in an intercontinental playoff and have been pitted against France, Peru and Denmark in Group C.

The Socceroos have been linked with a number of high-profile coaches since and the last one to throw himself on the stage was World Cup winning coach Luiz Felipe Scolari who claims to have been approached by Australia.

“I am one of the names they spoke with… to see if I was interested in taking them to the World Cup.”, Scolari told Reuters in an exclusive interview on Tuesday.

The 69-year-old tactician has just ended his two-and-a-half year spell with Chinese outfit Guangzhou Evergrande and after winning the league in three successive seasons former Brazil, Portugal and Chelsea manager appears to be ready for a new long-term project.

“I don’t intend in just taking a team to the World Cup. I intend on leading a team with an organised project for one or two years. But I am interested.”, he added.

In the meantime, Football Federation Australia (FFA) has moved to deny approaching Scolari over the vacant post.

FFA claim not to have approached any candidates for the job because its selection panel was still defining the criteria. The Federation also claim that the vacant post will be filled by mid-February.

Australia have been given 4.33 (10/3) betting odds to finish the World Cup in Russia as the Best Asian Team.