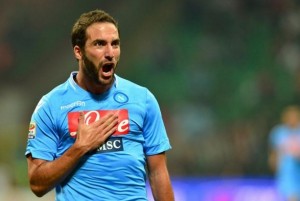 Diego Simeone is looking to bolster Atletico Madrid attack force this summer, with a couple of high-profile names already being lined up.

Diego Simeone has reportedly pinpointed the Argentine striker as his number one target and is willing to break the bank in order to land former Real Madrid player.

Atletico Madrid have already prepared a whopping €60 million transfer fee for the player who still has two more years in his contract with Serie A outfit. Higuain does not intend to renew his deal with Partenopei, but is willing to see it through should Napoli opt not to sell him in the meantime.

Gonzalo Higuain has a huge €94 million release clause which is unlikely to be activated by Atletico Madrid or any other club for that matter.

Atleti are hoping that Vesuviani will decide to lower their demands and choose to cash in on the striker instead of risk to have a displeased player in their ranks for the next season.

The Spanish side are willing to throw a player in order to sweeten up the possible deal with Oliver Torres or Luciano Vietto being lined up for a move to Italy.

Possible arrival of Gonzalo Higuain to Vicente Calderon would be a significant boost in attack as Fernando Torres and Antonio Griezmann would get some serious competition in the Argentine striker.

The 28-year-old Argentina international has scored 36 goals in 35 Serie A appearances last season.

Atletico Madrid key man from last season Antoine Griezmann has netted 22 goals in 38 games for Atletico last season, while the French striker has extended his fine form to Euro 2016 as well.

Key man in his nation’s European campaign, Griezmann has scored three goals in 4 appearances and is looking at the betting odds of 2.7 (17/10) @BetFair to score in the quarter-final match against Iceland on Sunday.