Arsenal open to selling Mesut Ozil, according to reports 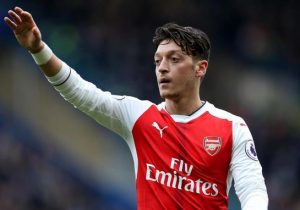 Arsenal are reportedly willing to offload German playmaker Mesut Ozil, according to the Evening Standard.

The midfielder has fallen out of favour under new Gunners boss Unai Emery this season and whilst the club are not trying to actively force him out of the Emirates Stadium, it is understood that they are willing to listen to bids. A major reason behind that is reportedly his £350k-a-week salary at the club, with the remit of controlling the wage bill in North London of importance for Emery and his staff despite the upcoming departures of Aaron Ramsey, Danny Welbeck and Petr Cech.

Ozil has been with Arsenal since 2013 having joined in an approximate £40m switch from Spanish giants Real Madrid. Since then, the 30-year-old has made 231 appearances, scored 43 goals and provided 74 assists. However, he has seen his game time plummet since the arrival of Emery and only managed to make 20 Premier League starts throughout the 2018/19 season.

Meanwhile, despite Emery having had a huge job on his hands at the start of this season following a fifth-placed finish and a humiliating UEFA Europa League final defeat to Chelsea, there are already names in the ring to replace him at the Emirates Stadium. Former midfielders Mikel Arteta and Patrick Vieira are the most fancied at odds of 15/2 and 9/1 respectively with Paddy Power.