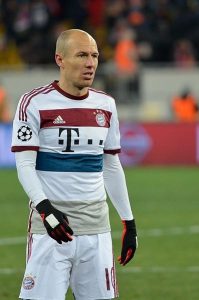 Bayern Munich winger Arjen Robben has suggested that he has not yet decided what his next move will be after confirming his departure from the German giants.

The Dutchman told last week that he would be leaving the Allianz Stadium at the end of the campaign upon the expiry of his contract. Whilst the 34-year-old suggested that he could potentially hang up his boots, he confirmed that he has not yet made a definitive decision on his future.

Talking to Bayern Munich’s official website, Robben said: ““[My future’s] still open, anything could still happen. Now was the right time to announce my departure,”

“For the fans and the club, everything is clear and everyone knows it’s over at the end of the season.

“I have time to think about my future and what the next step will be. It’s possible that I’ll retire. It could also be good to continue if something interesting comes up.”

The former Real Madrid and Chelsea man has enjoyed a relatively solid beginning to the season having scored five goals in 15 appearances in all competitions.

Bayern Munich take on Nurnberg at the weekend in an effort to reignite their stumbling Bundesliga campaign. Robben can be backed at 9/2 with Paddy Power to score the opening goal.