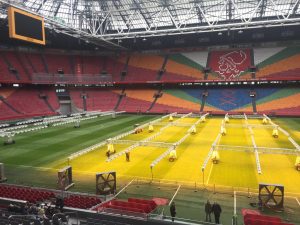 Tottenham Hotspur have it all to do on Wednesday evening as they travel to Amsterdam to take on Ajax in their UEFA Champions League semi-final second-leg.

Mauricio Pochettino’s men come into the game off the back of a 1-0 defeat to the recently-crowned Dutch champions and have to win if they harbour any hopes in reaching their first European final of any sort since the UEFA Cup victory back during the 1983-84 season. Meanwhile, Ajax also have a chance to get to their first Champions League final since finishing as runners up to Juventus in 1996. The bookies are backing Erik ten Hag’s men to progress, with the chances of their progression available at a price of 2/7 with Betfred. Meanwhile, Spurs can be backed at odds of 13/5 to reach the final.

One reason behind that could potentially be the poor recent form displayed by the North-Londoners. The Lilywhites have lost five out of their last six games in all competitions and nine out of their last ten matches away from home. As a matter of fact, they have lost their last three consecutive games by a scoreline of 1-0. A repeat of that scoreline is available at a price of 9/1 with Paddy Power.

A further aspect that could see Spurs painted as underdogs could be their extensive injury list coming into the match. Former Ajax defender Davinson Sanchez is most certainly out with a thigh injury, whilst Harry Winks is also restricted to the sidelines with a troublesome groin problem. The biggest loss is arguably Harry Kane though as he continues his comeback from an ankle injury. Despite those absences, a few others could return to action. Serge Aurier and Erik Lamela have both returned to training. Jan Vertonghen is also available after missing the slender loss to Bournemouth at the weekend due to injury.

Elsewhere, regarding Ajax, Hassane Bande and Carel Eiting both remain restricted to the sidelines. One man that the Amsterdam outfit will hope to see fit and firing though is former Southampton man Dusan Tadic. The Serbian has scored the third highest goals in the competition this season with six and only sits behind Lionel Messi and Robert Lewandowski. He can be backed at a price of 5/1 with Betfair to net the opening strike of the game.

Meanwhile, Heung Min-Son, who has scored four goals in his last four Champions League games is the favourite to open the scoring from a Spurs perspective and is also at odds of 5/1.