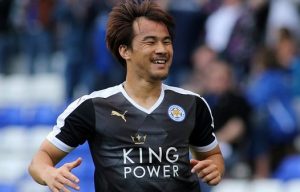 Leicester City forward Shinji Okazaki has emerged as a surprise transfer target for Serie A giants AC Milan in January.

According to reports from the Italian outlet Premium Sport, the Japan international is wanted at the San Siro as a direct replacement for his fellow countryman Keisuke Honda, whose contract is set to expire at the end of the season.

Italian sleeping giants are about to change ownership and the club’s new board is ready to invest in new players to help Rossoneri return to former glory.

Having failed to win the Serie A title since 2011, the Rossoneri are currently enjoying superb form which ultimately saw them beat reigning champions Juventus 1-0 last weekend thanks to a goal from youngater Manuel Locatelli.

Shinji Okazaki starred last season in the Premier League as Leicester City beat the odds to win the Premier League title and AC Milan’s hierarchy believe that the 30-year-old Japanese forward would bring great value to the squad and also be of huge impact in the marketing aspect.

As a club with huge fan base in the Far East, AC Milan are also keen to add Shinji Okazaki to boost their brand value and increase shirt sales in the Japanese market.

Claudio Ranieri holds Shinji Okazaki in high regard as he considers the Japan international to be an invaluable first-team member.

The 30-year-old continued to secure first-team football despite having to compete with Jamie Vardy and summer recruit Islam Slimani upfront for the most part of the new season.

The most prolific Japanese player in Bundesliga history has made 7 Premier League appearances for the Foxes this season, five of which were starts.

Okazaki contributed with only one goal, in a 3-1 win over Crystal Palace two weeks ago, while he also scored a brace in the 4-2 EFL Cup defeat at the hands of Chelsea back in September.

The Foxes have endured a difficult start to their domestic campaign, but have on the other hand been superb in Europe, winning all three Champions League group stage matches so far.

Ranieri’s men are travelling to Denmark on Wednesday and are given the betting odds of 3.6 (13/5) @Unibet to claim a win over FC Copenhagen.