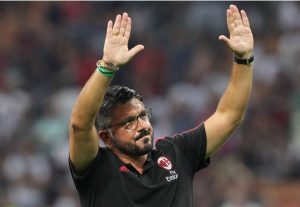 Serie A fallen giants AC Milan have sacked manager Vincenzo Montella and appointed Gennaro Gatusso as the man in charge of the first team.

Having lost six of their 14 matches in Italy’s top flight this season, AC Milan are coming off from a goalless home draw against Torino on Sunday which turned out to be the last straw for the club management.

Vincenzo Montella failed to make a notable result in the Serie A following a summer of big investments and has left AC Milan sitting in seventh with only 20 points next to their name. AC Milan spent £205 million since April last year when Chinese businessman Li Yonghong became the majority owner of the club.

The Italian heavyweights confirmed the news of Montella’s departure and Gatusso’s appointment in a club statement.

“AC Milan announce to have parted ways with Vincenzo Montella. Management of the first team is entrusted to Gennaro Gattuso, who leaves his position as Primavera coach and to whom we wish the best of luck.”, the statement read.

The 39-year-old Gennaro Gattuso steps up from managing the club’s youth side to take charge of the senior squad as a former player who won Serie A title with AC Milan and two Champions League trophies.

AC Milan are currently available at 19.00 (20/1) to finish the current Serie A season in top four.